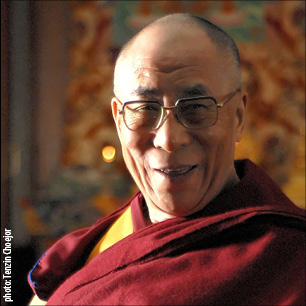 His Holiness the XIV Dalai Lama

On Tuesday, May 18, UC Santa Barbara Arts & Lectures will present a special event, Creating Hope with His Holiness the XIV Dalai Lama. This free virtual event is open to the general public and will be archived for those who cannot attend the live session.

Describing himself as a simple Buddhist monk, His Holiness the XIV Dalai Lama is believed to be a manifestation of the Bodhisattva of Compassion, inspired by a wish to benefit all sentient beings and vowing to help humanity. Chief among His Holiness’ principal commitments, he is concerned with encouraging people to be happy, advocating the cultivation of warm-heartedness, and human values such as compassion, forgiveness, tolerance, contentment and self-discipline. He was awarded the Nobel Peace Prize in 1989. In this keynote event of UC Santa Barbara Arts & Lectures’ 2021-2022 Creating Hope programming initiative, His Holiness is joined in conversation by Pico Iyer, a friend, observer and student of the Dalai Lama for more than 40 years.

The live event is scheduled for Tuesday, May 18, at 8:30 p.m. PT; however, organizers encourage audience members to arrive 20 minutes early, as the event may start sooner than planned. Join live on YouTube, or via the UC Santa Barbara Arts & Lectures Facebook page or website. The event will also be archived on YouTube for future viewing.