The U.S. Judge Advocate General’s (JAG) Corps offers the opportunity for lawyers to serve as armed forces officers and legal professionals. Founded by George Washington in 1775, the JAG Corps represents the legal interests of soldiers and the armed forces branch they serve. JAG Corps officers provide legal services to the military at all levels of command. After being discharged from the military, members of the JAG Corps go on to leverage their legal expertise in a variety of fields — including at UC.

On the ground serving the United Nations in Kosovo 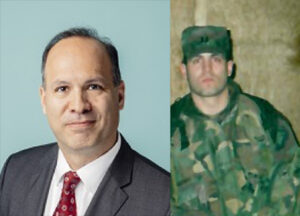 Alexander started his career as a JAG for the U.S. Army, where he provided legal advice to senior military commanders and their staff, and represented the Army in criminal investigations and prosecutions. While deployed in the Republic of Kosovo, he assisted the United Nations and non-governmental organizations in developing political and judicial infrastructure throughout the region.

From serving at sea to UCOP 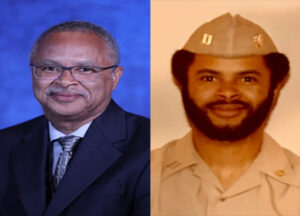 As a Navy JAG, Sims defended and prosecuted military personnel in court and administrative hearings, resolved grievances submitted against superiors and advised superiors on regulations, laws, court decisions and administrative actions. He also advised on and settled claims filed against the Navy. Sims’ last tour of active duty was serving on the legal staff of the Commander of the Naval Surface Force, U.S. Pacific Fleet, in Coronado, California. He retired as a Lieutenant Commander.

Transformative service through the Air Force in Iraq 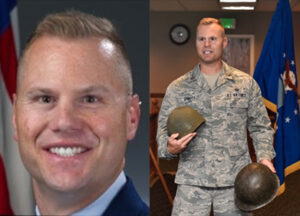 Carson Sprott is a principal investigator in the UC Systemwide Title IX Office. In this role, he investigates and assesses allegations of violations of Title IX, sexual violence/sexual harassment policy and violations of campus harassment, violence and discrimination throughout the entire UC system. He also supports UC’s development of new regulations and policies in these areas.

Carson was deployed in Iraq, just outside Mosul, to support Operation Inherent Resolve. There, in addition to supporting 2,300 missions and six combat units, he rapidly identified, investigated and coordinated the legal response to a potential Geneva Convention violation — actions that were personally recognized by U.S. Ambassador to Iraq and Acting Secretary of Defense Ashton Carter. Carson received an Air Force Commendation Medal for humanitarian support and expediting the liberation of 1.2 million citizens of Iraq. He continues to serve as a major in the Reserves at the California Air National Guard’s Joint Force Headquarters.

UCOP is grateful to all our military veterans for their devoted service to our country and the university. Please join us in recognizing them this Veterans Day.