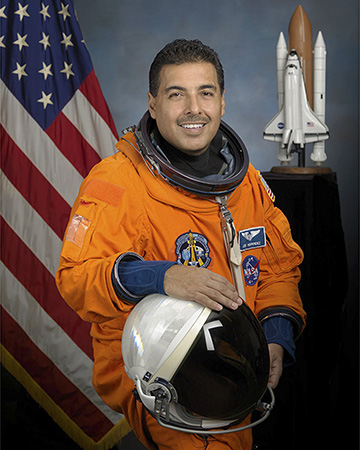 Jose Hernandez has been appointed to the UC Board of Regents

“I look forward to working with my new colleague, Jose Hernandez, to expand UC’s affordability and accessibility for all Californians,” said Estolano. “Jose’s personal story of perseverance, hard work and success is inspiring. With his deep ties to California, his commitment to education, and his expertise in science, technology, engineering and mathematics, I know that Jose will be a strong advocate for the University.”

“Mr. Hernandez brings decades of wide-ranging experience and impressive accomplishments to this role and will no doubt guide UC to even greater heights,” said Drake. “As a native Californian, an alumnus of the University of California, Santa Barbara, a former researcher at the Lawrence Livermore National Laboratory and an astronaut, Jose exemplifies the power of a UC education. His deep and diverse expertise will be a tremendous asset to the Board as we work together to serve students and families across the state.”

Jose M. Hernandez, 58, lives in Manteca, Calif., and has been president and chief executive officer at Tierra Luna Engineering, LLC, since 2012. He was president of PT Strategies at PT Capital/PT Strategies from 2013 to 2016. Before that Hernandez was executive director of strategic operations at MEI Technologies from 2011 to 2012. During his 10 years at NASA’s Johnson Space Center beginning in 2001, he served as an astronaut, legislative analyst, branch chief and materials research engineer. At Lawrence Livermore National Laboratory, Hernandez held numerous roles including program manager and engineer from 1985 to 2001.

Hernandez is a member of the League of United Latin American Citizens and Latinos in Science and Engineering. He earned a Master of Science degree in electronics engineering, signals, and systems from the University of California, Santa Barbara.

UC regents are appointed by the governor to 12-year terms and must be confirmed by the California State Senate. Once confirmed, they are able to begin their service immediately and do not receive compensation.