The UCOP Latino Staff Association (LaSA) is once again hosting a Cesar Chavez Commemorative Virtual Activity Challenge, taking place through March 31, 2022. This event remembers and honors Chavez leading farmworkers on a peaceful march from Delano to Sacramento to raise awareness of the farmworkers’ plight.

Participating staff select a physical challenge in accordance with their interest and ability to symbolize the 300 miles that Chavez and farmworkers marched, and make a donation in support of the LaSA scholarship fund benefitting UC Latinx students.

Join your colleagues in moving and supporting a great cause!

We reached out to two of this year’s participants to learn why they’re supporting the LaSA Cesar Chavez Challenge. 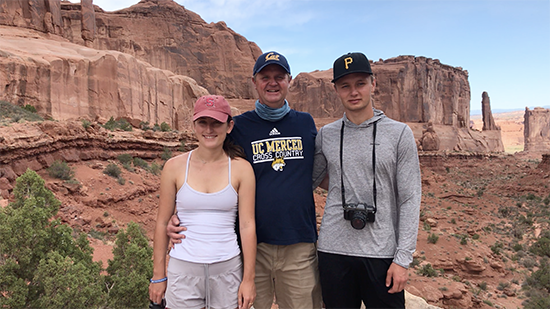 Nathan Brostrom (center) hiking with two of his children in Utah.

I have always been moved by the many social-justice and civil-rights movements that incorporate marches as part of their movement.  We can think of Dr. King’s marches from Selma to Montgomery, Cesar Chavez’s march to Sacramento or Gandhi’s march to the sea, in defiance of the British salt laws. I thought that it would be appropriate to honor these personal heroes by hiking myself, so I am committing to hike 50 miles a week for the length of the challenge. I generally hike in the hills behind the UC Berkeley campus, if anyone wants to join me. 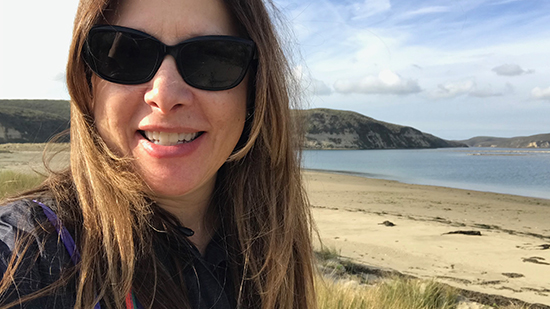 I’ve had the pleasure of joining the annual Cesar Chavez events sponsored by LaSA for years, and I was thrilled that LaSA got creative during the pandemic. The Cesar Chavez Activity Challenge last year was a great reason to get outside and walk. Living a block away from Cesar Chavez Street in San Francisco keeps his memory fresh in my mind. For my activity challenge, I walked the length of the street from the beginning at the waterfront to the end in the hills. I took time to pause and reflect on the mosaic murals telling the story of Cesar Chavez’s life, which was something I had not done before. It was also inspiring to see the activities others completed. Kudos to LaSA for creating a great way to fundraise for an exceptional cause — scholarships for the next generation of amazing UC Latinx students!