Expressions of protest and hope — street art sends a message 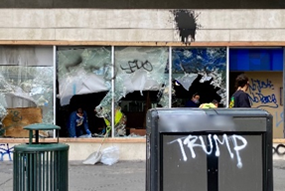 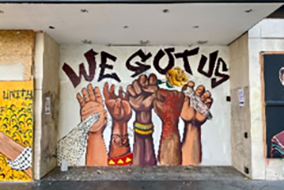 New mural on the Chase Bank building by Cece Carpio 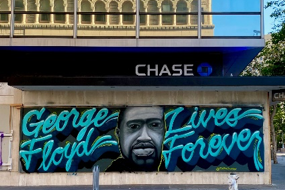 New mural on the Chase Bank building by DeredWRK (@deredwrk) 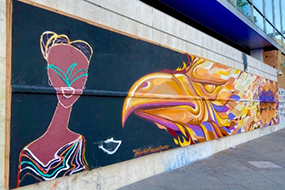 In the past weeks, UCOP communities and cities across the world have seen protests against racial injustices and calling for police reform. Many protests were peaceful, but some left our communities marked by looting and vandalism.

The sight in downtown Oakland on Saturday, May 30, the day after unrest left broken windows, damaged bus shelters, graffiti on many buildings and boarded up businesses everywhere was a discouraging one, but what happened next showed the true spirit and resilience of our cities and others around the country.

Protests continued peacefully, while deliberately and quietly, another form of protest and expression came to life. “Black Lives Matter” was painted on 16th Street in Washington, D.C., and on 15th street in Oakland. Volunteers came to remove graffiti from buildings, including the UCOP building at 1111 Franklin.

In Sacramento, Stevante Clark, brother of Stephon Clark who was killed by Sacramento police two years ago, joined this clean-up army. And, beautiful street art bloomed on plywood-boarded windows for blocks, refocusing the message on racial injustice.

Familiar buildings near the Oakland office were transformed. The Chase Bank building and others on Broadway saw significant damage and then by a week later were covered with art. The Oakland Museum of California and National Museum of African American History and Culture in Washington, D.C., are working with local communities and artists to collect and preserve these “expressions of protest and hope.”

UCOP stands with our communities and continues to work to ensure all voices are heard.

Editor’s note: Link tried to credit the artists when possible. Email link@ucop.edu to have an artist’s name added.