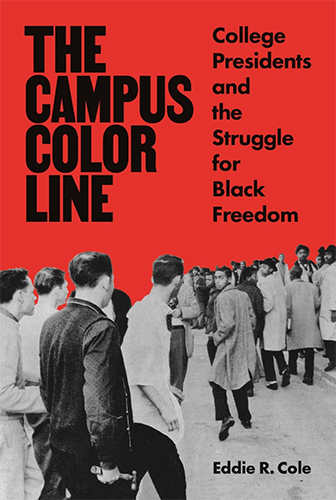 In times of racial strife, public attention often turns to the nearest college president for a comment, explanation or solution.

Dr. Cole walked us through the book and his process, starting with a road trip he made to various colleges and universities across the U.S. to comb through their libraries and archives. His research confirmed a significant impact by academic leaders on racial policies and practices, both within and outside of academia.

Conventional wisdom has it that young political and student activists were the main drivers of mid-20th-century civil rights actions, but Cole shows otherwise. In the uneasy years between 1948 and 1968, college presidents positioned themselves “[w]ith courage and hope, as well as malice and cruelty … amid conflicting interests and demands. Black college presidents challenged racist policies as their students demonstrated in the streets against segregation, while presidents of major universities lobbied for urban renewal programs that displaced Black communities near campus. Some presidents amended campus speech practices to accommodate white supremacist speakers, even as other academic leaders developed the nation’s first affirmative action programs in higher education.”

Cole devotes a chapter to an influential UCLA president, Franklin Murphy. Warned by contemporaries against accepting an “impossible job,” Murphy made a success of the position during 1960–68, one of the most tumultuous periods of the 20th century for race relations and for established systems like the University of California and the forces (such as President Murphy himself) who would push for changes at every level.

“The Campus Color Line” unspools the complicated legacy of academic leaders’ actions and their ongoing influence on the struggle for Black freedom and racial equity, in education and beyond.