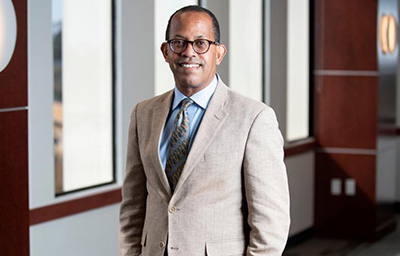 I am very pleased to announce the appointment of professor of history and of African American studies, Douglas Melvin Haynes, as vice provost for Academic Personnel and Programs in the Office of the President of the University of California. Reporting to the systemwide provost and executive vice president for Academic Affairs, the vice provost has responsibility for UC’s 74,000 academic personnel, including supporting the inclusive success of academic appointees attracted to our 10 campuses, five academic medical centers, and three national laboratories.

He will have oversight responsibility for several systemwide academic programs, including the California Digital Library, UC Press, President’s Postdoctoral Fellowship Program, UC Center Sacramento, UC Washington Center, University of California Television and the Advancing Faculty Diversity program. As vice provost, Professor Haynes will work closely with the Academic Senate and university leaders to assure academic priorities are met. In addition, he will function as a spokesperson to the Regents, the Legislature and other outside agencies as needed.

Professor Haynes comes to the Office of the President from UC Irvine, where he served as the inaugural vice chancellor for equity, diversity and inclusion and chief diversity officer. In that role, he oversaw nation-leading efforts that established UC Irvine as a global model of inclusive excellence. As part of a comprehensive vision of inclusive excellence, he led the UC Irvine Black Thriving Initiative, secured federal designation for the campus as a Hispanic Serving Institution and Asian American Native American Pacific Islander Serving Institution, and established the UC Irvine Confronting Extremism program.

During his tenure, he introduced a range of programs in support of early career scholars, equitable search practices and work-life integration. In 2021, the American Association for the Advancement of Science honored UC Irvine with the STEMM Equity Achievement Bronze award in recognition of its commitment to transforming the professoriate and knowledge workforce of the future.

A former Fulbright scholar and president’s postdoctoral fellow, Douglas Haynes completed his doctorate in modern European history at UC Berkeley and received his bachelor’s degree in history from Pomona College in Claremont, California.

Joining the UC Irvine faculty in 1992, his research program and teaching interests span from the development of the modern medical profession and comparative health care systems to representations of disease and illness in mass media. A designated chancellor’s research fellow, Dr. Haynes served as the founding director of the Center for Medical Humanities, leading path-breaking collaborations among faculty from the schools of the arts, humanities and medicine to advance the understanding of health, healing and well-being. He was also a founding faculty member of the Department of African American Studies and served as the inaugural director of the undergraduate program in Global Cultures. In recognition of his many contributions to the university, the Academic Senate awarded him the Distinguished Mid-Career Faculty Award for Service.

I highly commend the search committee led by Gregg Camfield, executive vice chancellor and provost at UC Merced and professor in the School of Social Sciences, Humanities and Arts, for their excellent and efficient work in conducting the search for the vice provost.

Please join me in welcoming this San Francisco native, Douglas M. Haynes, back to the Bay Area and to his new position as vice provost for Academic Personnel and Programs in the UC Office of the President.