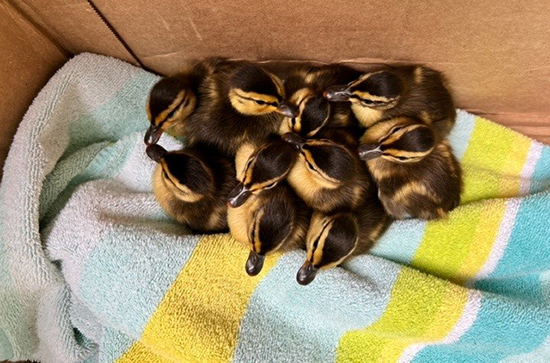 UCOP’s ducklings on their way to the wildlife preserve

Some good news to start your week: On Friday, Oakland staff relocated the 10 ducklings that were born on the 5th floor Franklin roof garden earlier this year. 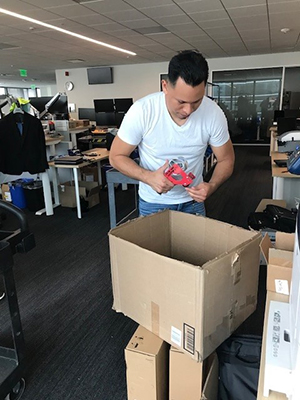 About 6 weeks ago, Mama Duck was spotted by Steve Murray as she was scouting out a nesting space. She ultimately decided on a planter box, and soon laid eggs. Once ducklings hatched on May 25, several IT Client Services (ITCS) and Building and Administrative Service Center (BASC) staff members worked together to help ensure their health and safety. They called several wildlife and volunteer animal rescues, who recommended providing the ducklings with water and kale.

“The International Bird Rescue in Fairfield advised us that our plan to capture the mama and her ducklings and transport them to the Alameda duck pond would result in the mother abandoning the ducklings. So, we caught the ducklings and brought them to the Fairfield facility, where they will be rehabilitated and released when old enough,” explains Shirley Bittlingmeier, executive Director, IT Client Services. “The mother will eventually fly away, but it was definitely sad to see the mama following the box of ducklings.” 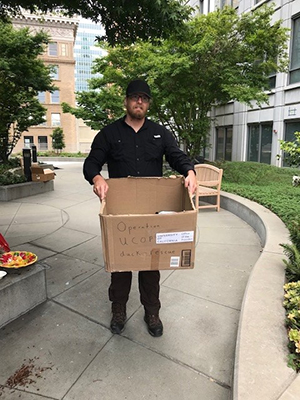 The process was gratifying for staff who joined in relocating the ducklings. “It’s one activity that all of us on site can focus on amidst all the other tragic events that have happened over the past couple of months,” says Shirley.

Thanks to all the BASC and ITS teams who helped these ducklings have a happy new beginning, especially: